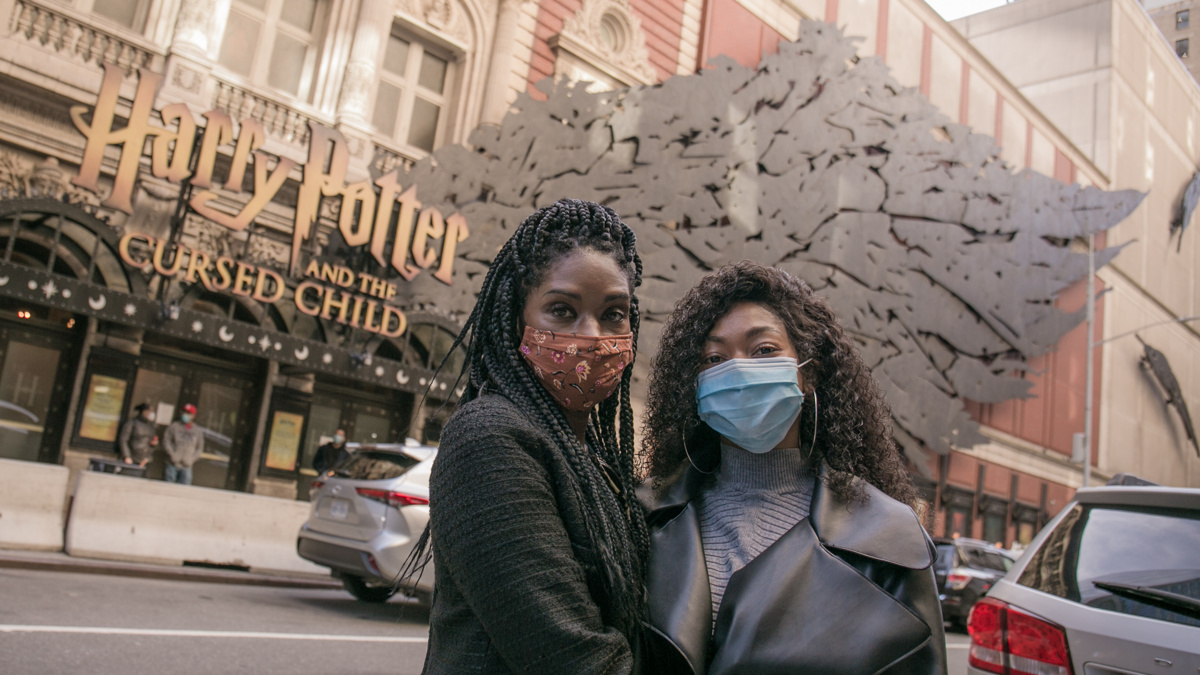 Living near the theater district during the Broadway shutdown, photographer and performer Matthew Stocke has been haunted walking past the empty theater palaces sitting in repose, waiting for the lights and stars to return. In this new Broadway.com photo feature, he reunites members of the theater community with their Broadway home Away From Home.

Jenny Jules and Nadia Brown have not played mother and daughter in Harry Potter and the Cursed Child for months, but their bond is still strong. The Tony-winning, two-part epic shut down just as the performers were approaching their one-year mark in the show. Here, Jules and Brown reunite in front of the Lyric Theatre to talk about what they miss, and what they’ve learned. 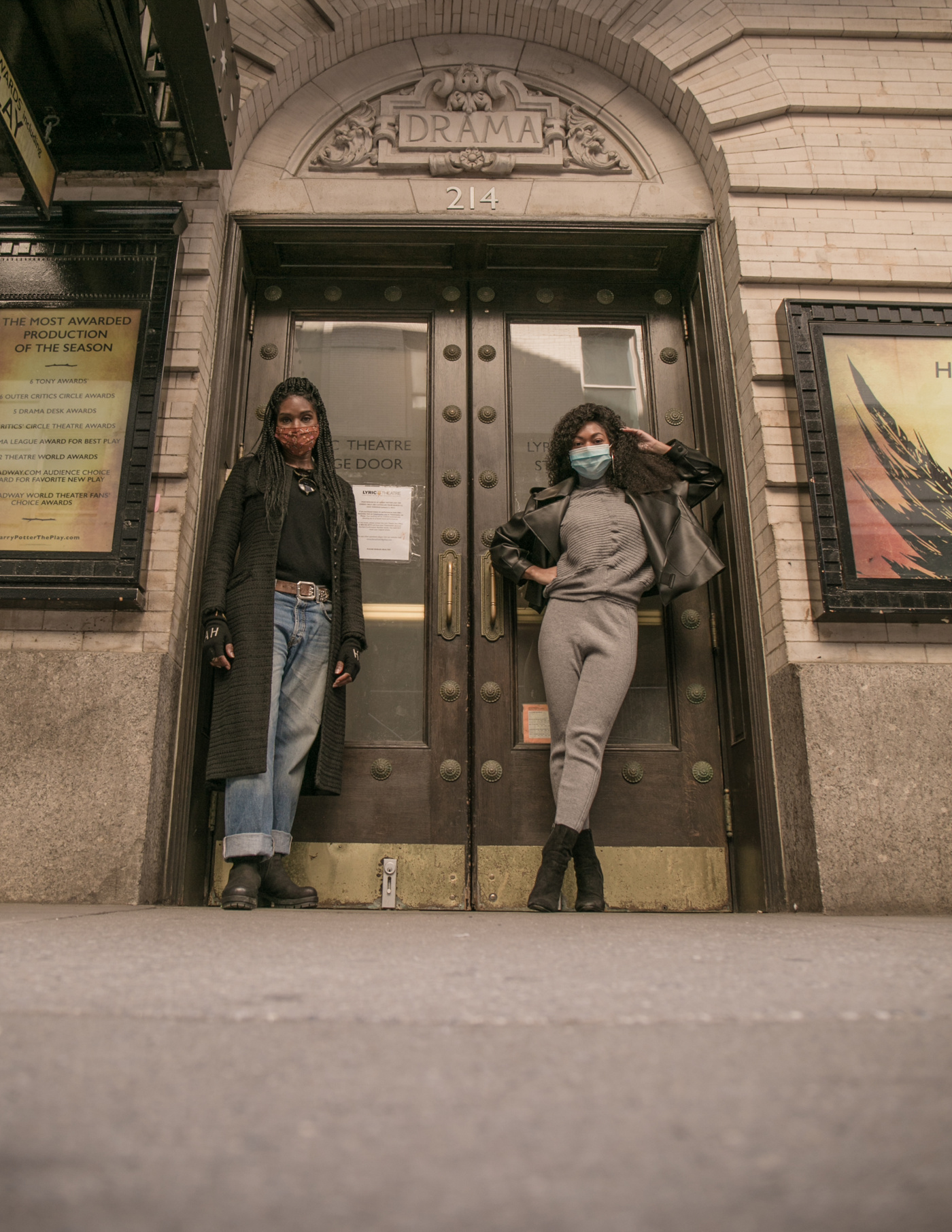 NADIA BROWN
HARRY POTTER AND THE CURSED CHILD
“There are so many kismet moments for me with Harry Potter. I really wanted to go to grad school before I booked it. I joke around that Hogwarts is my grad school. This first year, I really felt like a freshman in the class of Broadway. I look up to Jenny. She is so warm and welcoming. Just to see her in person for the first time in months—it’s unbelievable. We’re not pretending. She’s a real mother figure to me. She enters a space, and she commands it in a way that’s not domineering, but you automatically put respect on her name. That’s how I want to be one day….I was going to have a huge party on the 22nd of March for the year three opening and my birthday. It was going to be like old cast, new cast, all of our directors, everybody who worked in the Lyric Theatre. I live in New Jersey, but I would spend 20-plus hours of the day out in New York at the theater. I can’t wait to go back. I dream about it like once a week: walking back into the theater. It’s always super joyful. I appreciate the person who I’ve had to grow into during this time. Honestly, I feel like I’ve become a better human being, which will only make me a better actor.”

JENNY JULES
HARRY POTTER AND THE CURSED CHILD
“I think every actor, if they’re honest, wants to perform on Broadway. It’s kind of boastful moaning when you’re in a really amazing job, you’re doing the job of your dreams, and you’re still going, ‘Oh my God, I’m so exhausted. I wish I could have a day off. Eight shows a week. Oh my God.’ I don’t think I’m ever going to moan about being too tired doing a show ever again. That’s over…To be in a cast of people who just love and respect each other and the work was a dream come true, really. It has been a dream job. To see Nadia is just delicious—this girl is my daughter. We just looked at each other, I put my sunglasses up and said, ‘I know that as soon as I see you, I’m going to burst into tears, because I’ve missed you. My heart has missed you so much.’…Our trust as humans is kind of broken in a way. We all walk around the grocery store or to the park or whatever, and we’re all masked up. We try not to give each other eye contact. It’s devastating to see the marquees [with the] lights down. It’s like a still-life painting. But there is this determination that I believe we will be back. We’ve all grown in this weird time that we’ve been separated, and I believe it is for the better. I know that when we all get together, we will all look each other in the eye and just go, ‘We’ve got a job to do.’ Because if one member of the audience walks back into that theater, takes their seat and is brave enough to do that, then we all have to be brave enough to put on the best show that we have inside our bodies.” 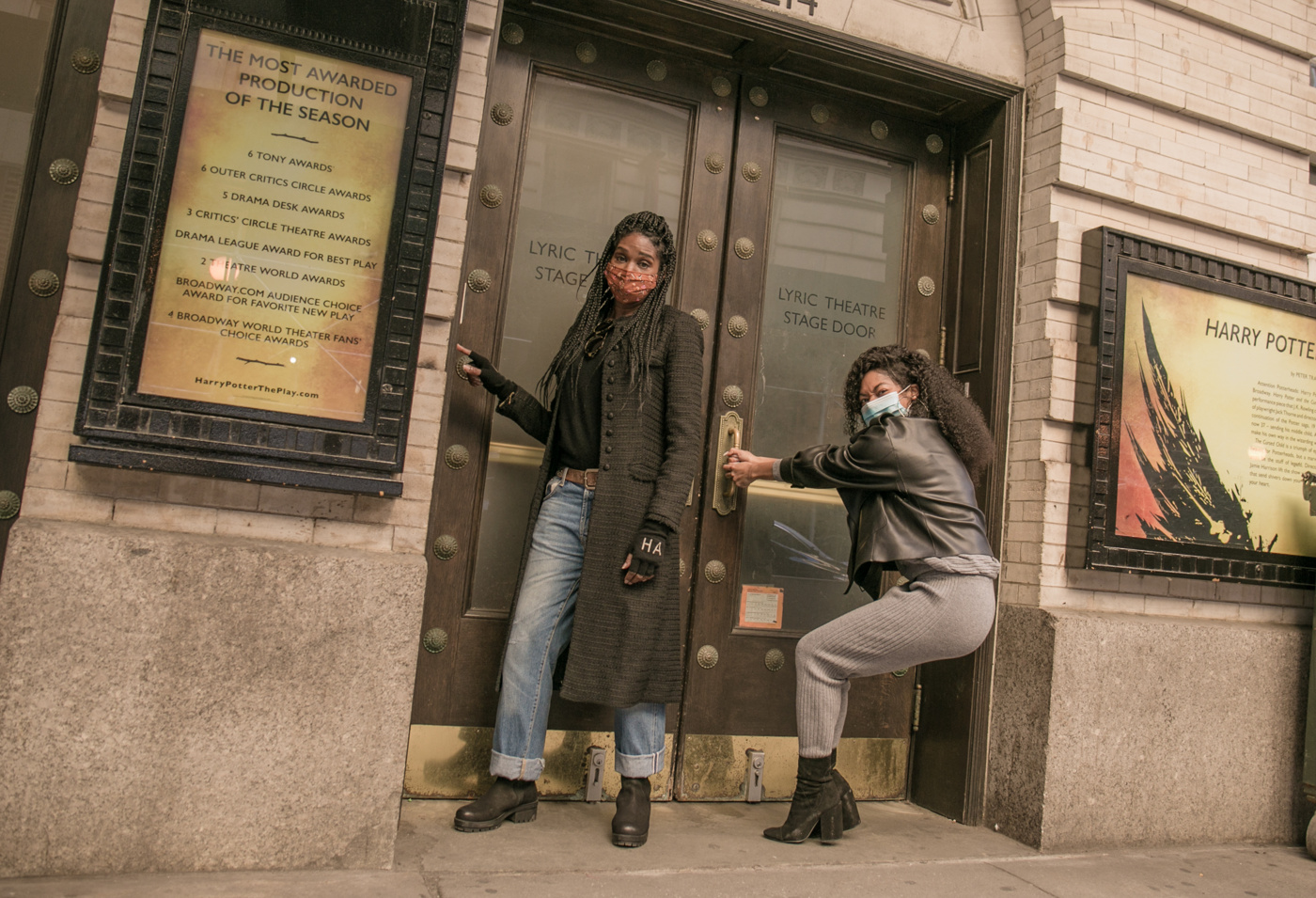