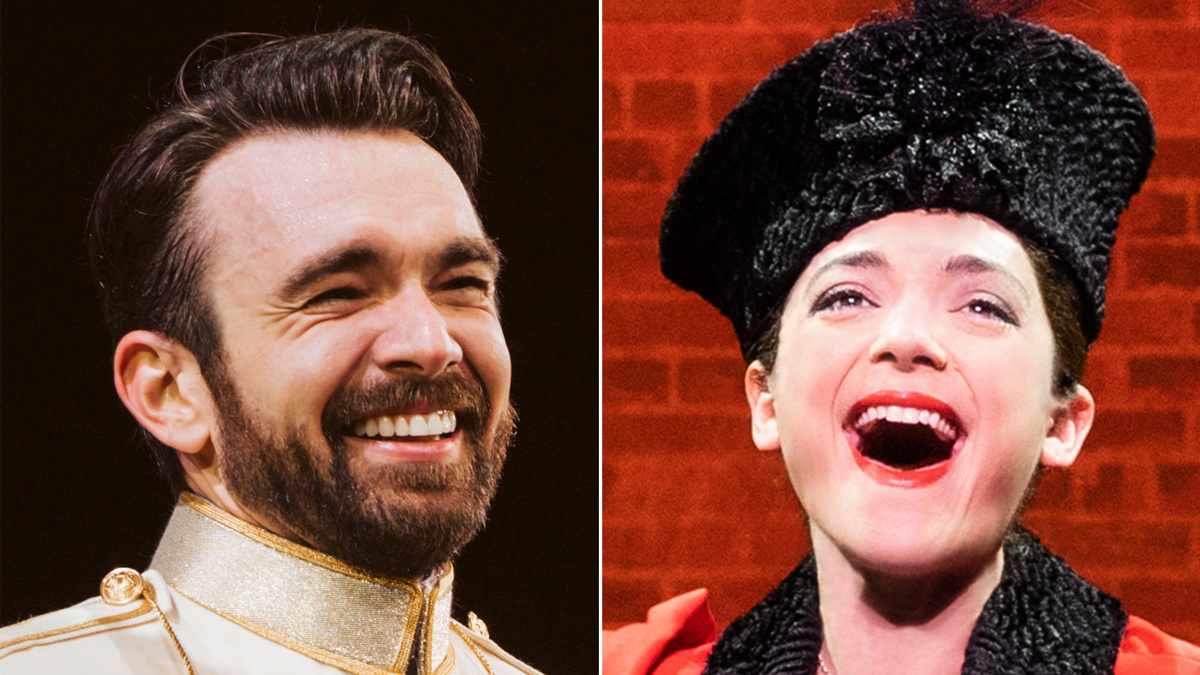 Both Broadway revivals of The Music Man and Funny Girl have had audiences buzzing over their starry headliners—Hugh Jackman, Beanie Feldstein and Lea Michele, who will step in as Fanny Brice on September 6. Two other performers are wowing crowds in these hit productions: Max Clayton and Julie Benko, who serve as the standbys for Harold Hill and Fanny Brice, respectively. They sat down with Broadway.com Editor-in-Chief Paul Wontorek at citizenM Hotel on The Broadway Show with Tamsen Fadal to continue the conversation about the importance of performers ready in the wings.

Clayton has been involved with The Music Man since he was performing in Moulin Rouge! The Musical. “I was brought on board right before the pandemic in the fall of 2020,” he said. He has gone on in the leading role, notably, during the week following the 2022 Tony Awards: “I got the call that I was going on the day after the Tony Awards, which was a crazy night for me and Matt [Doyle], my partner, who had just won a Tony on Sunday. On Tuesday, I was playing Harold Hill on Broadway.”

“When I got cast, I assumed, ‘Oh, I’ll never go on,’ you know?” Benko said of her experience in Funny Girl. “Then you go on and you sort of black out. You enter this weird focus state where your body sort of takes over—it knows what to do because you’ve done it in your living room that many times.” In addition to appearing onstage for Feldstein, Benko has been headlining the revival since August 2 and will do so until Michele makes her Broadway return. Benko will also play the role every Thursday evening during Michele’s run.

“Normally, I have gotten entrance applause, but there have been a few times where people just didn’t know. They’re like, ‘Who is that?'” Benko continued. “Then, to feel that the switch happen after ‘Greatest Star’—where literally the first lines are, ‘I’m the greatest star, I am by far, but no one knows it.’ People would laugh because they didn’t know who I was. At the end of the number, I could suddenly feel how excited they were. It becomes this meta-theatrical moment where they’re like, ‘It’s an unknown person, and now, suddenly, I’m invested.’ They’re on your team, and you can feel it. It feels like you go on this journey together. They’re just so excited to have been there for this moment where they feel like they’ve discovered you, and you’re just so grateful that they were there to be supportive in that moment—which is such a vulnerable moment.”

For Clayton and Benko, the support of the audience is echoed by the encouragement of the cast. “We both have covered in many shows. It’s one thing to be a standby for two of the largest roles ever written. It’s another thing to be a standby for an individual,” Clayton said. “I’m so blown away by the support of the cast, the audiences, the creative team, the producers who are celebrating all of us. Hugh Jackman and Sutton Foster are truly the greatest leaders I’ve ever worked with. They’re such wonderful people, first and foremost. The fact that they have taken the time to essentially stop the show after bows every time to celebrate us is something that we don’t take for granted at all.”

Watch the video below, and head here to check your local listings for The Broadway Show. Hosted by Emmy-winning anchor Tamsen Fadal, it is the only nationally syndicated weekly theater news program.